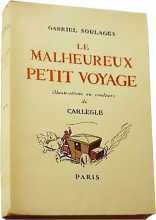 This popular French light romantic novel – Le malheureux petit voyage ou la misérable fin de madame de Conflans, princesse de la Marsaille rapportée par Marie Toinon Cerisette, sa fidèle et dévouée servante (The unfortunate little journey and miserable end of Madame de Conflans, Princess of Marseilles, as reported by Marie Toinon Cerisette, her faithful and devoted servant) to give it its full title – was written in 1907 by Gabriel Soulages, a lawyer practising in Albi in southern France, and became a popular subject for illustrators. As well as Carlègle, Le malheureux petit voyage was illustrated by Umberto Brunelleschi in 1926 (you can see his illustrations here), Maurice Leroy in 1942, and Paul-Émile Bécat in 1950 (you can see his illustrations here).

As you can see from Carlègle’s deftly-drawn characters, the success of illustrated versions of Le malheureux petit voyage derives almost entirely from depicting pretty young Madame Conflans and her willing maid Marie as naked as possible as often as possible, and Soulages contrived that they would be given every opportunity, from sharing a bed and a skinny dip to being caught in a skirt-raising gale. Sadly, though, the ending is not a happy one.

The Carlègle edition of Le malheureux petit voyage was published by Chez Valère in a run of 940 numbered copies.