The full title of this 1907 romantic tale is Le malheureux petit voyage ou la misérable fin de madame de Conflans, princesse de la Marsaille rapportée par Marie Toinon Cerisette, sa fidèle et dévouée servante (The unfortunate little journey and miserable end of Madame de Conflans, Princess of Marseilles, as reported by Marie Toinon Cerisette, her faithful and devoted servant). It was written by Gabriel Soulages, a lawyer practising in Albi in southern France, and became a popular subject for illustrators. As well as Umberto Brunelleschi, Le malheureux petit voyage was illustrated by Carlègle in 1936 (you can see his illustrations here), Maurice Leroy in 1942, and Paul-Émile Bécat in 1950 (you can see his illustrations here). 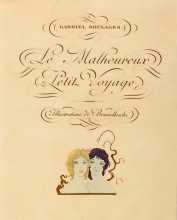 As you can see from the illustration portfolios on this site, Umberto Brunelleschi has two quite distinctive styles; one classic art deco, with bright colours and clean lines, the other much more mannered and ‘antique’, harking back to the eighteenth century. The change occurred around 1930, and may have been as much to do with publishers’ perception of their clienteles as with Brunelleschi’s preferred style – he was certainly also producing striking art deco designs well into the 1940s. Le malheureux petit voyage is one of his most successful art deco commissions, and it is rather unfortunate that it was not printed on a higher quality paper which would have made the most of his colourful designs.

Interestingly, both the pencil sketches and the watercolour images supplied by the artist for the printer to check the colours of the printed lithographs against have survived for Le malheureux petit voyage, and a sample is shown here.