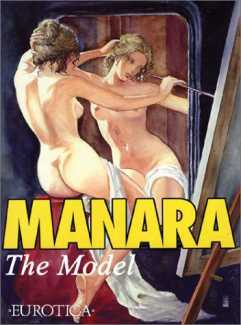 Manara dedicates this book to history’s models, and perhaps it was just an excuse to dazzle us with his fantasies of naked women, but this collection is more than that. The models are researched, described and presented as beautifully as they were when they inspired so many works of art. Uta, Pankaspe, Theodora of Byzantium, Lucrezia Bini, Fornarina, Titian, Phyllis, Artemisia, and dozens more are paid homage to in the flowing text which accompanies the artwork. Manara seems to have been just as inspired by these long-dead models as the famous masters were, creating modern works of art for us, and a vision of who these models were. He also demonstrates his talent to create paintings in the style of so many well-known artists, all the way from cave painting, via the Impressionists and Picasso, to pop art.

Here is Manara’s introduction to the book:

I still remember from my days as a student the model for my classes at the art school. Her name was Suzy. I remember with an affectionate gratitude her long hours of immobility beside the large ceramic heater. Back then, when you said ‘model’, people didn’t think of ‘top models’. Nowadays, models are those splendid girls parading around with the same haughty bearing, the same sinuous walk, in whatever extravagance they’re sporting; the heroines of a fabulous world of luxury, riches, transgression and fame, always on the go to another destination around the world.
Back then, people thought that these models, ready to pose in the nude for a few cents, were girls of dubious morality, nearer to the world of prostitution than that of fine art.
In reality, the history of models is inextricably linked to the history of art, and their role is of immense importance in our civilisation. We owe so many masterpieces to them! And yet, while we’re ready to reward artists with honours and recognition, nobody seems to remember the models.
This work hopes to be a modest attempt at that acknowledgment. By surveying the history of art with respect to models, their names and personal history, I want to show not just that they were more than just bodies, but also to what extent they were an authentic inspiration for artists. The infinity of choices that I had before me obliged me to limit this research to a few examples among the most emblematic. They include the mythical Phryne, Praxiteles’ muse, Artemisia Gentileschi, who was her own model, or, more moving yet, the model of Caravaggio’s ‘The Death of the Virgin’. Fished out of the Tiber where she’d drowned, she was then depicted in that very state: her stomach a bit swollen with water, yet still of great beauty, inspiring the artist even in death. A model to the very end. Her name was Phyllis. This book is dedicated to her.

The Model was published by Eurotica.