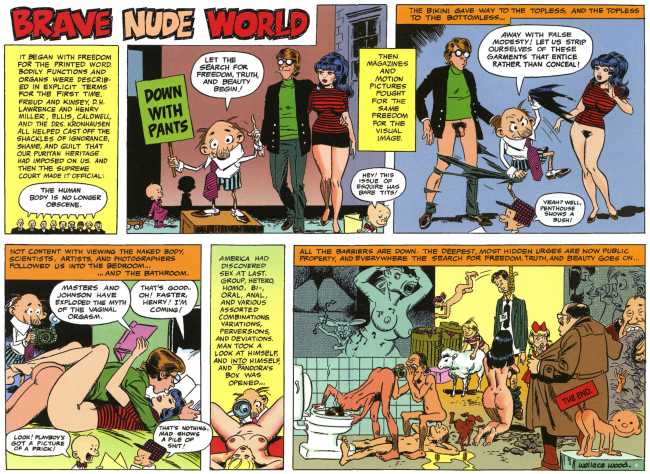 Also in 1976, a new full-colour publication, National Screw, commissioned Wood to produce an X-rated version of Alice in Wonderland, which clearly stimulated his creative juices, both in the drawing and in the adaptation of the well-known storyline. His version of ‘Jabberwocky’ is particularly notable:

’Twas ballig and the sleazy tongues
Were writhing fondly in the fray
All flimsy were the hornophiles
And dressed in negligées.

Beware the banderbush my son!
The labes that grab, the vulves that catch!
Beware the jug-jug bird, and shun
The lascivious candy-snatch.

He took his rigid dork in hand,
Long time his turgid tool he whacked,
Till came he on the cum-cum tree,
And stood with whanger slack.

As in succulent thought he stood
The banderbush with labes inflamed
Came bursting thru the lacy frills
And coming as it came!

Do doubt about it, in and out,
The rigid dork went pecker-pack.
She gave it head, and left it dead,
And went a-humping back.

‘And hast thou lain the banderbush?
Come in my arms, my erectious boy!
Oh lubrous day! Callooh callay!’
She panted in her joy.