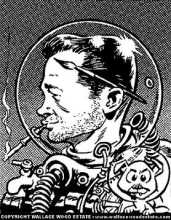 Wallace ‘Wally’ Allan Wood was a fast-living, hard-drinking, fiercely independent man who packed several lifetimes into his 54 years. Wood and his older brother, Glenn, were raised by a lumberjack father and a schoolteacher mother in the forests of Minnesota and Wisconsin.

Just after high school, with World War II still raging, Wood joined the Merchant Marines. He spent 1945 cruising the South Pacific on a fuel tanker. In 1946, Wood enlisted in the Army’s 11th Airborne Paratroopers and was stationed in occupied Japan through 1947. Upon his discharge, he took a semester at the Cartoonists and Illustrators School (now the School of Visual Arts) in New York City, and then began assisting Will Eisner on The Spirit and George Wunder on Terry and the Pirates. He formed a studio with Harry Harrison and Joe Orlando, and they began churning out crime, Western and romance comics.

His work began appearing in EC Comics in early 1950, and he soon became one of the company’s top talents in titles such as Tales From the Crypt, Two-Fisted Tales, Shock SuspenStories, and especially Weird Science. When he appeared in the first issue of Mad in 1952, it began a historic twelve-year run on what would become one of America’s most popular magazines. Now a superstar, Wood began illustrating science fiction books and magazines by such authors as Isaac Asimov and Philip K. Dick. Eisner sought him out to return to The Spirit, and he collaborated with Jack Kirby on the Sky Masters of the Space Force newspaper strip and on the Challengers of the Unknown series for DC Comics.

In the 1960s, after helping Len Brown and Woody Gelman create Mars Attacks for Topps, Wood left Mad. He created the risqué spy strip Pussycat for Magazine Management’s men’s titles. For Marvel, he reimagined Daredevil, creating villains and the enduring look of the character. Wood was the first creator publisher James Warren sought out when he decided to establish a line of magazine-format horror comics. The influence of Wood’s military background continued in his Blazing Combat and Total War/M.A.R.S. Patrol work. For Tower Comics he created the T.H.U.N.D.E.R. Agents. In 1966, Wood self-published the first issue of his maverick magazine, witzend.

In the 1970s Wood co-created Power Girl for DC Comics, and produced the sexy newspaper strips Cannon, Sally Forth and Shattuck for an appreciative audience of American servicemen. He also created his famous ‘Panels That Always Work’ tutorial, and his pioneering Wizard King graphic novels.

But decades of sleepless workaholic nights fuelled by caffeine, nicotine, alcohol and more took its toll on the quiet, squint-eyed, wondrous wizard of the panelled page. By 1981 Wood had suffered strokes, kidney failure, and was facing a future hooked up to a dialysis machine and unable to draw. Sometime between midnight on Halloween and the early morning hours of 3 November 1981  the gun-loving ex-GI with the mischievous glint in his eye decided to check himself out of this world. True to his quiet nature he left no note, but the legacy he left us eclipses that of the large majority of those who tarried here much longer. 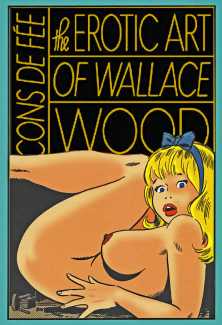 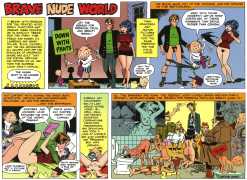