So White and the Six Dorks

By 1980 Wood was finding it very hard to concentrate on new work, and every frame involved physical pain and almost impossible effort. Throughout 1980 and 81 he produced simple black and white strips for Gang Bang magazine. ‘Sally Forth’ and ‘Lil an’ Abner’ appeared in the launch issue, alongside this version of Snow White and the Seven Dwarves. 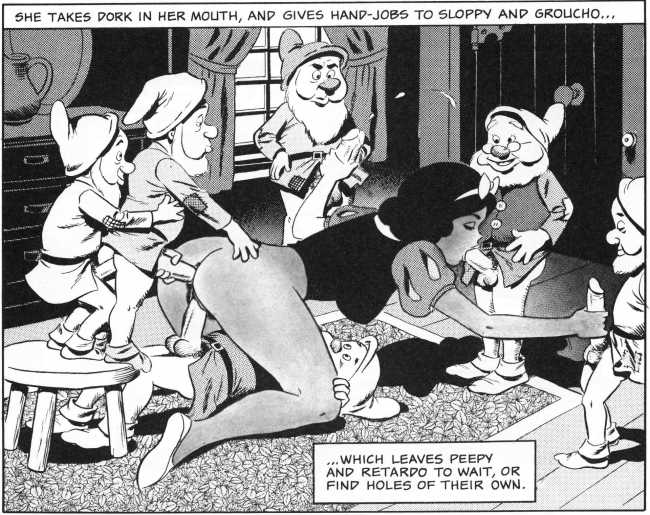 Gang Bang’s second issue included Wood’s ‘Stuporman Meets Blunder Woman’, ‘Flasher Gordon’ and ‘Starzan’, but as J. David Spurlock writes, ‘Many Wood fans choke and gasp in horror at much of Wood’s Gang Bang material. You can watch it get progressively worse as Wood gets sicker and sicker. As bad as his health and his ability to draw were, however, these lampoons of comic strips and fairy tales rove that he still had his sense of humour and that he still loved comics.’

Less than a year later he was no longer in this world.