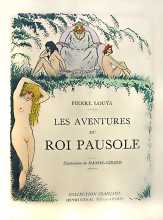 Daniel Girard’s illustrations for the Henri Cyral edition of Pierre Louÿs’ Les aventures du Roi Pausole are among the last he produced for this well-known publisher of luxury editions of French classics. It was included in Cyral’s ‘Collection Française’, described in the publisher’s catalogue as ‘a new collection dedicated to the novels of French authors, richly illustrated by means of watercolour, with a sufficiently large print and a reasonable price. The print will generally be twenty copies printed on Madagascar or Annam to include original watercolours, 30 copies on Arches paper, and 970 copies on Rives vellum. The price will vary between 400 francs for the de luxe edition and 200 francs for the copies on Rives.’ The series eventually ran to nearly fifty titles, of which Girard illustrated seventeen.

Girard clearly enjoyed illustrating Pausole; his naked women are very 1930 and mostly have real character, unlike those of some of his journeymen contemporaries; there is a sense of at least some of them having been drawn from life, which must have added excitement to the commission.