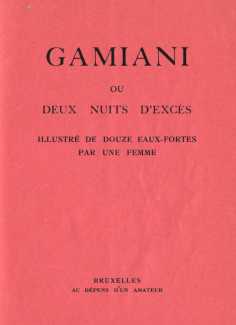 The publisher’s imprint is given as ‘Bruxelles: au dépens d’un amateur’ (‘at the expense of an amateur’, or by limited subscription), but it was in fact published in Paris, in an edition of 150 copies. May den Engelsen also produced a set of twelve watercolours to accompany the two most expensive copies, which probably resulted in as much income as the rest of the edition. One of the two de luxe copies was owned by the erotica collector Gérard Nordmann, and included in the sale of his collection in April 2006.

The only rather unfortunate aspect of this edition is that it was printed on poor-quality paper, so the print tends to show through on the reverse of May den Engelsen’s robust engravings.

The collector Tony Fekete’s copy of the den Engelsen-illustrated Gamiani was included in the May 2021 Marie Saint-Germain sale of erotica, so we have finally been able to put the twelve illustrations in the correct order.