Born Marie-Jeanne den Engelsen in Amsterdam, we have been able to discover nothing more about this talented illustrator’s early life before she met fellow artist Frans de Geetere in Holland towards the end of the first world war. From then until both died in Paris in 1968 they were rarely far apart, sharing adventures, their river barge home, art projects in which they were worthy collaborators, and several lovers of both (and all) sexes.

We know what she looked like from a couple of photographs and a late-1920s portrait by Frans, but of her life we know mostly only what her close friend Caresse Crosby wrote about her in her biography, The Passionate Years, in 1953. May (or Frenchified ‘Mai’ to Caresse and her other Paris friends) was very much part of the lively and experimental Paris art scene in the 1920s and 30s, and the barge Marie-Jeanne, home and studio to May and Frans moored on the Seine close to the city centre, was a natural meeting place for the artistic couple and their circle. 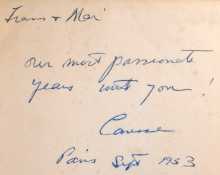 Here is what Caresse wrote about May and Frans during their time together in interwar Paris, from the copy of her autobiography which she inscribed to them with the telling inscription ‘our most passionate years with you!’: ‘Frans de Geetere came to France dragging his barge behind him, and having manoeuvered the dikes of Holland and the frontiers of Belgium and the northern waterways of France, he strode into Paris one summer evening towing his dwelling with May den Engelsen, his timid blonde bride atop of it – he on the footpath, a stout rope about his lean and muscular middle. At twenty-one with sunburned torso, a crest of wild black curls, and snapping black eyes, Frans was a story book character and May, his Netherlands wife, was as frail and honey-golden as some princesse lointaine. There were two tortoiseshell kittens aboard and a hold stuffed with paintings of flowers and nudes in profusion, for Frans had come to Paris for Art’s sweet sake, not to study, because he was already confident and bold, but to compete in the marketplace with the greatest artists of the day.’

Caresse Crosby might have thought of May as timid, but she was not that timid. Caresse and her millionaire playboy husband Harry first met the de Geeteres in March 1927 at one of the wild parties at the Hôtel de la Salle. Harry, who was always on the lookout for pretty young women to bed, was impressed by May; the next day he wrote to his mother in America, ever his confidante, ‘how adorable’ he thought May ‘in her red flowing dress, gold necklace and white skin’. In the following months the two couples met regularly, Frans and Caresse becoming lovers as did Harry and May, sharing beds, orgies, and dives where hashish and opium were freely available. When the Marie-Jeanne starting taking in water in a bad winter storm, the Crosbys offered the couple accommodation in their luxury apartment; May and Frans chose to stay with the barge while it was towed to dry dock for repair, but regularly visited the Crosbys for hot baths and champagne suppers.

May den Engelsen illustrated only three books, and even these were often advertised alongside (and confused with) Frans’s work. All three were on lesbian themes, very much the rage at the time, and it is interesting to wonder how far May was attracted to them because they were commercially lucrative and how much because she was exploring her own sexuality. They have a very distinctive style, similar to Frans’s but even sparer and starker, and have the air of being based on real-life models and experiences. 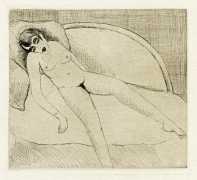 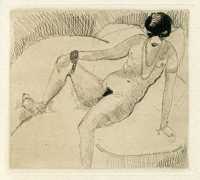 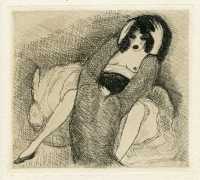 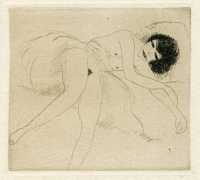 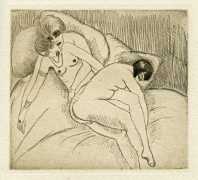 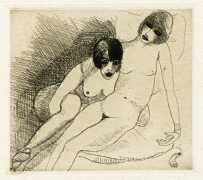 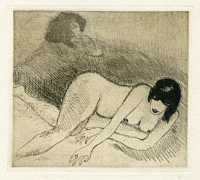