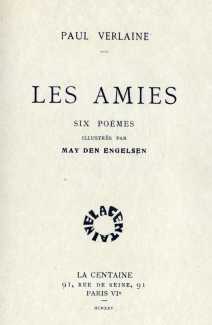 May’s constant partner and co-conspirator Frans also contributed seven illustrations, and they worked together on the project, producing the prints on the hand-press aboard the Marie-Jeanne.

May produced seven engravings for the book, one for each of the sonnets, ‘Sur le balcon’, ‘Pensionnaires’, ‘Per amica silentia’, ‘Printemps’, ‘Été’ and ‘Sappho’, plus a frontispiece and introductory plate. A total of 111 copies were printed, of which fifteen were specially bound in luxury bindings with an extra set of plates.