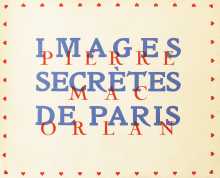 By the time Images secrètes de Paris was issued by the publisher René Kieffer in 1928, the prolific writer and social commentator Pierre Mac Orlan was a noted figure in Parisian Bohemian art circles, and he and Gustave Assire would certainly have known and admired each other’s work. Images secrètes de Paris was produced in an edition of 550 copies, fifty of which included an original watercolour study. 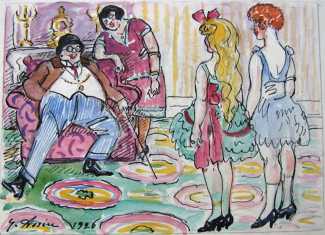 The watercolour shown here (with thanks to Neil Philip of Idbury Prints) shows a client making his choice in the salon of a maison close, with the madam at his side and the girls lined up before him. Assire draws it with great humour and verve; his emphasis throughout Images secrètes is on the liveliness of the scenes he records rather than on the tawdry aspects of the bar-brothel.

One of the interesting things about these etchings is the artist’s use of extra drawings or remarques around the border, full of life and interest, adding additional glimpses into the world of the main image.