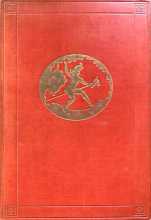 Honoré de Balzac (1799–1850), probably the most famous of French novelists, is best known for his novel sequence La comédie humaine (The Human Comedy), which presents a panorama of post-Napoleonic French life and is generally viewed as his magnum opus. Alongside his novels, though, he also wrote many shorter stories, which were collected and published between 1832 and 1837 as Les cent contes drolatiques (The Hundred Droll Tales).

Like La comédie humaine, Les cent contes drolatiques owe much to Balzac’s keen observation of detail and unfiltered representation of society, with multi-faceted characters who are often complex and morally ambiguous.

This Bodley Head commission for Bosschère’s illustrations contains the first ten of the Droll Tales, in the translation by Julian Lewis May; it includes the two best-known tales, ‘The Fair Imperia’ and ‘The Venial Sin’.

As with the Ovid, Balzac’s subjects gave Bosschère plenty of material to illustrate. Of the twenty-four illustrations, eight are in black and white, eight in full colour, and eight in three colours including an arresting red.

The Bosschère-illustrated Balzac was published in a limited numbered edition of 3,000 copies.