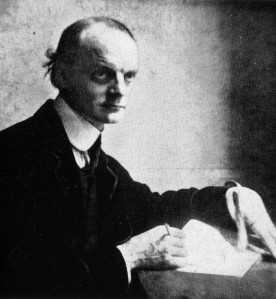 Between 1901 and 1905 he regularly visited Paris, where he met writers with a passion for the occult. In 1905 he married Jeanne Fanny Alexandra Jones; they separated officially in 1923. From 1905 to 1914 he wrote regular articles and monographs, and two years later he published his first collection of poetry, Béâle-Gryne, which he illustrated himself.

The style of these illustrations, as well as most of his later work, was a version of art nouveau heavily influenced by the drawings of Aubrey Beardsley. He was also influenced by the Roman Catholic spiritual works of French poet and dramatist Paul Claudel, who he saw lecture in 1909. That same year, he began a lifelong friendship with the Antwerp symbolist poet Max Elskamp (of whom in 1914 he published a critical study), and in 1911 of the French writer André Suares.

After the outbreak of World War I he fled from Belgium and went to London where he met writers such as John Gould Fletcher, Aldous Huxley and D.H. Lawrence, and poets including Ezra Pound, T.S. Eliot and Richard Aldington. His illustration style was much in demand in the 1920s, and London publisher The Bodley Head commissioned him to illustrate a series of classical erotica by Apuleius, Ovid, Flaubert and Balzac.

His later life, which he considered a failure in artistic terms, was marked by a persistent spiritual search: he developed his fascination with the occult, the spiritual, the obscure and the sexual, giving himself the nickname ‘Satan l’Obscur’, the title of an autobiography published in 1933. His lovers included Vera Anne Hamilton and Élisabeth d’Ennetières, with whom he spent his last years living in France. Despite his self-doubt, in 1952 he received the Prix de la Méditerranée and the Mandat des Poètes.

Following his death several of his works were published, but much of the output of this prolific writer, which is kept in the Archives et Musée de la Littérature in Brussels, remains unpublished.

The collector Alain Bilot and Bosschère enthusiast John Anzalone have created a webpage about the author and artist under the auspices of Skidmore College, which you can see here. It includes more biographical information and samples from nearly all his published works.

The First Temptation of St Anthony (1924)