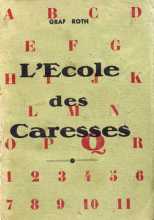 A typical Losfeld-published title from mid-1950s Paris, L’école des caresses (The School of Strokes) differs from most in having a varied suite of illustrations in addition to the rather predictable text. With nothing to suggest otherwise, it is assumed that the illustrations as well as the text are by Valorbe, here using his ‘Graf Roth’ pseudonym.

The illustrations are very 1950s in style, and have every indication of being copied from a variety of sources; some are quite imaginative while others are distinctly mediocre.