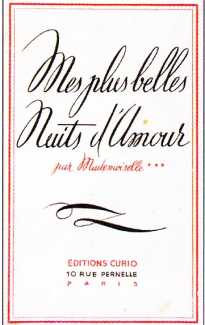 Éditions Curio was established in 1924 by one ‘Charles-Etienne’, pseudonym of the owner of Curio and author of some twenty titillating titles. They were sold mostly through the publisher’s bookshop, Librairie des Curiosités Littéraires, at 14 rue du Renard. Curio stopped publishing in 1935, and some of its titles, including Mes plus belles nuits d’amour, were reissued by Éditions d’Antin. 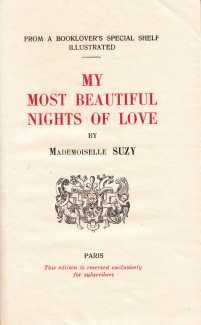 An English-language edition of Plus belles nuits, My Most Beautiful Nights of Love, appeared in 1928, ‘reserved exclusively for subscribers’, and with the fictional author credited as ‘Mademoiselle Suzy’ rather than the ‘Mademoiselle … ’ of the French edition.