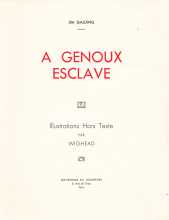 À genoux esclave (On Your Knees, Slave) is another sadistic fantasy set in foreign parts from Les Éditions du Couvre-feu, publishers of Les cruelles frénésies de Van den Rook. A mysterious island near Argentina is home to a domination colony run by wealthy women. The natural surroundings provide a striking contrast to the torments of the enslaved, who are used as seats, steps and toilets. A militia of robust fishwives and prostitutes polices the discipline. One of the slaves, a French lawyer, describes his ordeal with masochistic pleasure in an intimate notebook.

The text is by ‘Jim Galding’, undoubtedly a collective nom de plume used by the authors of several clandestine publishers, and the ‘Wighead’ illustrations are more detailed and accomplished than those of other titles using the same artist pseudonym.

À genoux esclave was one of Couvre-feu’s best-selling titles, aided no doubt by the illustrations, and in 1937 Les Éditions d’Antin published an English translation.