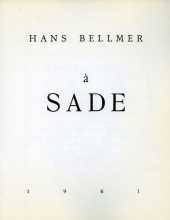 Hans Bellmer was fascinated by the writings and ideas of Donatien Alphonse François, Marquis de Sade. They chimed with his conviction that nothing that human beings are capable of is off-limit to the true artist. Bellmer believed absolutely in the free satisfaction of sexual instincts to explore sensuality and creativity, and that the dark forces lurking in the soul of every human being can usefully be explored in the pursuit of creative understanding.

Hans Bellmer produced two Sade-related portfolios, À Sade (For Sade) in 1961, and the more adventurous Petit traité de morale in 1968. He produced each of the ten plates for À Sade in two versions, one monochrome and one in colour using the original print overprinted with a different plate in colour, overlapping them to highlight the extremes of each of his subjects. Each of the images, engraved by Bellmer at the height of his graphic achievement, is delicately engraved, his line firm and controlled.

As with Leonor Fini’s illustrations to de Sade’s Juliette from the late 1940s (which you can see here), Bellmer’s images do not illustrate de Sade’s narrative so much as create composite illustrations which evoke the spirit of the texts.

In 1966 the Robert Fraser Gallery in London held an exhibition of Bellmer’s Sade engravings; at that time the subject matter was so controversial that it was closed by by the police. Though times have become more liberal, Bellmer’s powerful images have lost none of their capacity to make their viewers think about the limits of artistic transgression.