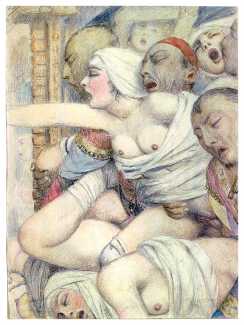 We can be fairly sure that ‘Fameni’ was French, because despite the Italian-sounding name the captions to some of the drawings are in French. We know that the drawings were made prior to 1955, because that is the date some of them found their way into the collection of Sieglinde and Karl Ludwig Leonhardt and thence (the collection was sold after their deaths) into other collections.

We know that birth dates of 1885 and 1888 have both been attributed to ‘Fameni’, as has the alternative pseudonym ‘Leporini’, but it seems nobody can remember why. Is there some vague connection between ‘Fameni Leporini’ and the Italian lepre affamata, or ‘hungry hare’?

On one hand the fashions look mid-1930s, but as some have pointed out the shaved pubic regions are more 1950s or 60s. If we had to hazard a guess, it would be that most of the ‘Fameni’ drawings were created in the late 1940s or early 1950s. 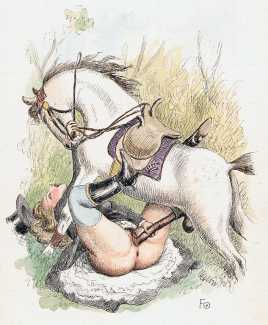 The final thing we know is that, in the way these things develop on the internet, everyone borrows from everyone else, usually without any attribution. Thus the largest collections of ‘Fameni’ drawings (until ours) are to be found on websites like La Conchiglia di Venere, Smuttytoons, and the now-defunct Sademarchese. Unsurprisingly the quality of the scans is extremely variable, the content very mixed without much sense of the narratives we are able to show here, and some of the ‘Fameni’ drawings depicted are clearly not by the same hand, so not by ‘Fameni’.

Because of the non-consensual pictorial content and lack of any biographical information, we almost decided not to include this artist on the site, but both the quality and social context of these portfolios (not to mention the intrigue of trying to identify their provenance) swung the argument in favour of including them. We hope you agree. 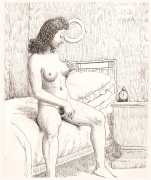