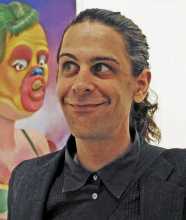 Sometimes a good way to understand an artist is through their own artist statement; here is Gregory Jacobsen’s from 2002: ‘Figures limp and hobble on and off the stage. Boils, pustules, bashed-in noses, big beefy hairy bodies flap. Visceral meat clumps, steaks sitting slightly soiled, deeply split, sprouting tiny hairs. The curtain rises to reveal palpitating gristle groaning a song of lost love. It performs a burlesque dance, gyrating hips, stumbling on high heels, finally flipping itself into a garbage can. A great big thick neck small head sweaty muscle man with a threatening posture exclaims to the audience, “Congratulations on fulfilling your useless existence! Please leave immediately or I will knock upon your heads with my immensely bloated meaty fists!”’

The American artist Jacobsen works in several mediums including printmaking, sculpture and performance art, but within his diverse body of works it is his growing collection of paintings that form what is perhaps the most stunning and expansive portion of his oeuvre. Originally from New Jersey, the artist moved to Chicago in order to attend art school. His early experiences colour both his paintings and his relationship with the world: ‘I'm originally from Middlesex, New Jersey. It's sort of industrial. They manufactured nuclear bomb parts there, and at some point they had to remove all this radioactive dirt from the site, which they buried in a junkyard two blocks behind my house and covered with tarp and tires. There was another field of it next to the Catholic school down the street, where I attended catechism classes; they only recently removed it. Then, in the 1980s, on the street over from mine, it seemed like every factory blew up. There was also a company upstream on the Raritan that would dump all this shit in the river every couple of years, and it would run down into our neighborhood pond and kill all the ducks and fish.’

Many of Jacobsen’s paintings blend the boundaries between the human and the non-human – a strange middle ground emerges, where his lush backgrounds are populated by uncanny, hybrid beings possessed of vaguely human features, yet posturing themselves like animals, their clawed and furry appendages replacing their arms and legs. When they are joined by non-human entities, the members of Jacobsen’s troupe act not as predators or prey, but rather as enthusiastic participants within the brutal revelries, allowing themselves to be disembowelled and cannibalised. Jacobsen explains, ‘All the characters are me in a certain way. I am painting what I wish I was, but also what I obsess over in myself – bad and good, disgusting and sensual.’ Jacobsen’s work also contains elements of magical realism. ‘A lot of my early work was based on an Alice in Wonderland aesthetic,’ he says, ‘It's still there in my construction of an alternate reality, my own personal world that I would like to exist in.’

As well as painting, Jacobsen is very involved in performance art, including stage shows and song-writing. Like in his painting, where figures wear little-girl dresses and little-boy underwear, shows includes much exploration of gender and the oddness of sexual behaviour. He is part of a Chicago-based performance group called Lovely Little Girls, and often performs in dresses. But this isn’t about being ‘feminine’ or submissive; as he explains, ‘I want to  explode all that male versus female, aggressive/submissive shit. I once had this nitwit assume that I would be a submissive partner because I was a boy wearing a dress, even though the performance was very angular, off-putting, and aggressive. People cling to these old values and stereotypes. I’ve always related most to androgyny, and I really like strong sexuality in people, but I also don’t like the extreme postures of being macho or ladylike. Both have always irritated the hell out of me; they’ve always seemed to be a pose so that people can more easily fuck each other.’ 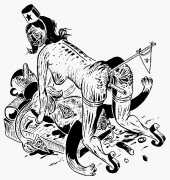 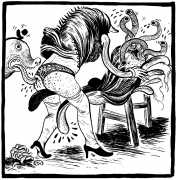 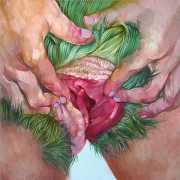 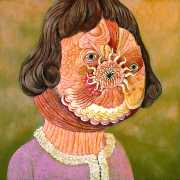 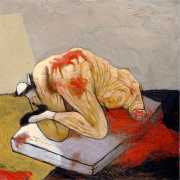 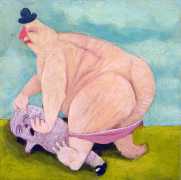 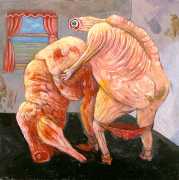 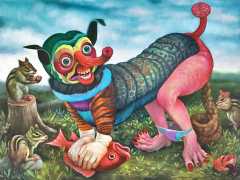 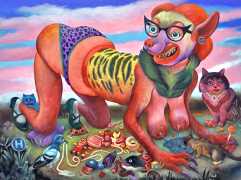 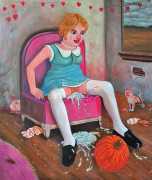 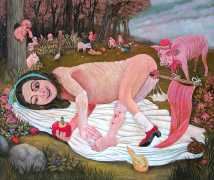 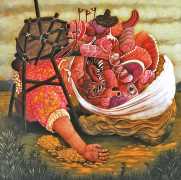 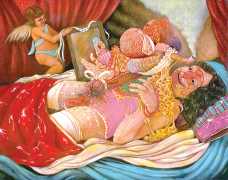 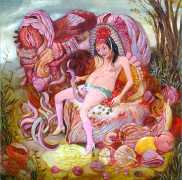 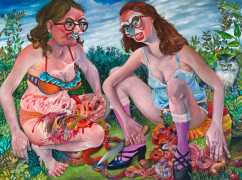 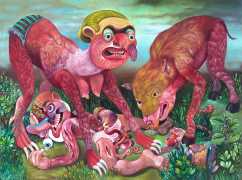 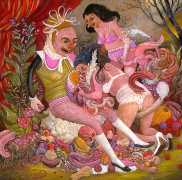 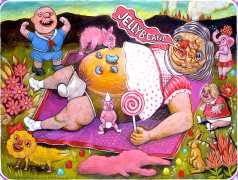 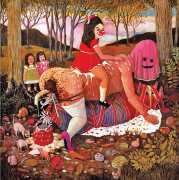 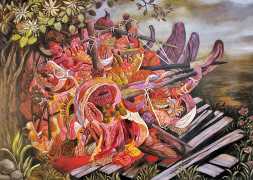 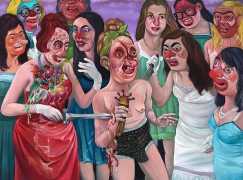 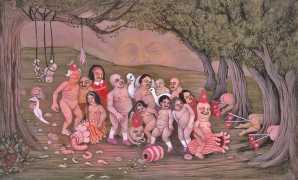 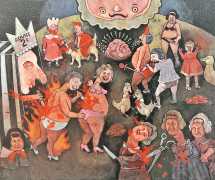 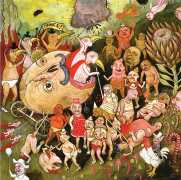