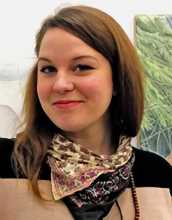 Pennsylvania-born-and-bred Rebecca Morgan has become well-known in American art circles for her depictions of rural life, usually featuring herself and other ‘mountain folk’ enjoying themselves in the great outdoors. She grew up in Bloomsberg, where she studied art before spending time in New York studying at the Pratt Institute, but is now back in Bloomsberg where she lives and has her studio.

Rather than assimilating into the art world and making her figures inhabit an urban environment, Morgan depicts social types long mocked by the mainstream media. Morgan’s hillbilly characters are the not-so-distant cousins of the poor citizens of Dogpatch, the fictional village found in the long running syndicated comic strip Lil Abner, and the less fortunate friends of the Clampett family, the central characters on the popular TV comedy The Beverly Hillbillies. The primary difference is that Morgan’s figures are more unselfconscious, rotund, raunchy, uncouth, loony, and scandalous than their mainstream counterparts. A dark satirical streak runs through her work.

Rebecca Morgan has not packaged what she does into a single style. While her influences may have included comic books, MAD magazine, and the cartoonist Robert Crumb, she works in a very different way in her prints and drawings than in her watercolours and paintings. She also creates ceramic crock jugs, following a local tradition of making mugs with stylised human faces.

Morgan writes of her background, ‘I am from a conservative farm town in Western Central Pennsylvania, in the Allegheny/Appalachian Mountains. I grew up with a very limited scope and basically non-existent understanding of art and its precedents, even though I drew still lifes with my grandfather and took Saturday art lessons. I was always making or drawing something, using it as an outlet to cope with banality. Claiming any kind of creative profession was never a conversation; the lack of knowledge or exposure, in retrospect, was crippling, and in many ways I displace the blame onto the backwoods environment I lived in.’

Kristin Farr of Juxtapoz magazine describes her work in glowing terms: ‘The charm of her fleshy figures radiates with relentless confidence. While flexing their flaws, they are flawless as subjects of art, imperfectly perfect and magnetic in their realness. If only one figurative artist could be immortalised in contemporary American art history, Rebecca Morgan would be a top contender.’

Here is more of an interview with Kristin Farr and Rebecca Morgan from the June 2016 issue of Juxtapoz.

Your characters feel very empowering. Is that a common reaction?

I hope for that reaction! Many have expressed how they make them feel empowered or refreshed. The face jugs, cartoons and paintings represent a kind of blissful ignorance: they’re totally fine with looking so hideous and awful; it’s of no consequence to them. Though covered in acne, wrinkles, and blemishes, their confidence and contentment is the ultimate acceptance of self-love. They’re blissfully unaware, unruly, wild and untamed. They live off the grid, free, unaffected by anyone or anything’s influence, and I’m very attracted to that concept. I am always interested in the anti-hero, the underdog, the unlikely winner. I root for them and I see a lot of myself in them.

Is your work ever misunderstood?

Many people from home felt as if I was making fun of rural individuals, making them simpleton idiots, but that is very far from the truth, as I am endlessly proud and inspired to have grown up in rural Pennsylvania. It’s worst when people don’t understand the intent, or mistake what you do for something else, but it is out of your control. There is a lot of learning to let go in art. Sometimes I just want to paint a goofy, cathartic picture of a wrinkled granny witch smoking weed.

What are hunting camps and why are they a stage for your work?

Hunting camps are where people congregate during hunting season. They are often simple, without luxury, and remote. Hunting camps are often the first place that teenagers go to party. Camp is where you go to get drunk, have sex, shoot guns, smoke, fight and generally get rowdy deep in the woods. In early American literature and folklore, the woods are symbolic as a place outside of society, ungoverned by social rules, standards and prying eyes. Often the characters retreat to the woods to do their bad behaviours or secret rituals far outside of city limits, and that rings true in my experience. The woods serve as the theatrical setting for many of my portraits.

Are you your most frequent model?

The large-scale graphite drawings and most of the females in the naturalistic paintings are specifically representations of myself. Many times the characters are inspired by people I knew growing up: classmates, tavern heroes, and subjects of local gossip. Most of the time, they are general archetypes: the maiden, the mountain man, the witch, the good girl, the bad girl, a farmer, an artist. I want to be the good girl. I want to be the cool artist. I want to be the mountain man living off the grid. I want to be the mysterious loner woods witch. With the Mountain Man painting, my model was a scrappy-looking friend from Pennsylvania I asked to pose shirtless on my porch. We cracked jokes, and I prodded him to get this wide-eyed wild cackle that would look like he was laughing, jovial and happy, yet could also be viewed as manic, wild or insane. Many people have said that they know someone who looks just like him, and that is just what I’m striving for.

She is represented by the Asya Geisberg Gallery in New York, which regularly shows exhibitions of her work. 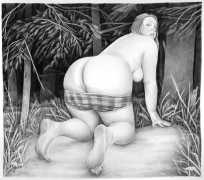 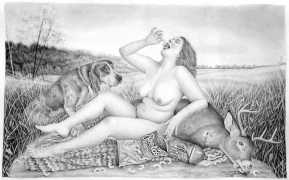 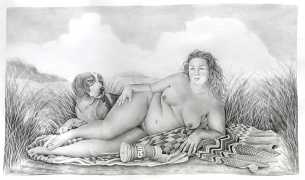 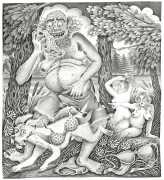 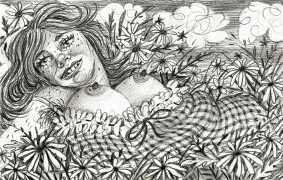 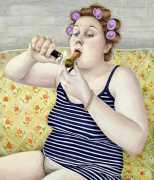 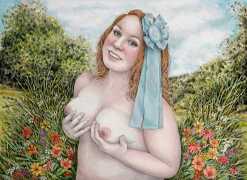 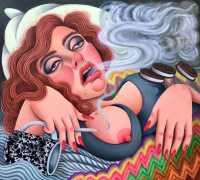 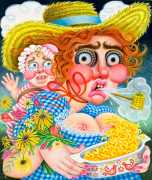 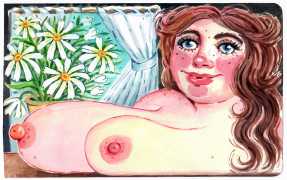 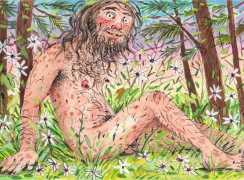 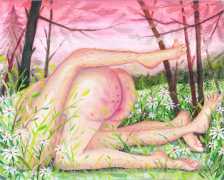 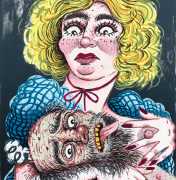