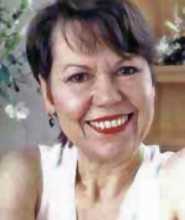 In his foreword to The Illustrative Art of Lynn Paula Russell, the late Victor Arwas, founder of the pioneering London-based Arwas Gallery, wrote ‘Serious and dedicated as an artist, Russell is also a humorous, fun-loving introvert who, paradoxically, can transform herself into a grandiose exhibitionist. This little book reproduces a variety of her pictures, forages into a dark fantasy world of perfumed eroticism strictly regimented, clad and unclad, by strange rules and stranger images; look closely at them, for many of its heroines are the artist herself, projected into her own, and other people’s, often unavowed dreams.’

Most of Paula’s work reflects her personal journey of self-discovery in which her art intimately reflects, often in stark and painful detail, the experiences she needed in order to know at first hand the subjects that she illustrated. It was never enough merely to be interested or to use her considerable graphic skills to portray what she could imagine; she always needed to immerse herself in the explicit activities of whatever exploration or narrative she was concentrating on. The details of her experiences in video, film and modelling are outlined in the biography below; we concentrate here on her illustration work, where she pioneered the technique of detailed pencil drawing to produce realistic and believable responses to the texts she worked with.

By far the most complete biography of Paula Russell is her entry in the German version of Wikipedia, which gives some indication of where her most loyal following may live. Here is an English translation of that entry (which if you want to read the original with all its footnotes is to be found here).

Lynn Paula Russell was born Lynn Paula Smith, and grew up in a sheltered respectable family with her three sisters in Whitstable, a small English town on the coast of Kent. At the age of thirteen, on a family trip to London, she saw in a shop window a magazine with a cover photograph of a bare-breasted woman, which she regarded as extremely shocking and obscene.

As a teenager she was active in amateur theatre and showed artistic talent; she attended the Canterbury College of Art, which she left in 1969 to go to London and train with the Royal Academy of Dramatic Art. For the next six years she was a professional actress, mostly at small repertory and open air theatres, and for a while she performed in the first UK national tour of the musical Hair, where she appeared naked on stage for the first time. She also appeared, as Lynn Smith, in several British television productions, including The Pallisers and David Copperfield (both in 1974) and The Cedar Tree (1976).

As her acting career was not as successful as she had hoped, in the late 1970s she turned to painting and illustration. Her first commission was illustrations for the 1977 children’s book Beyond the Midnight Mountains, written by her partner at the time Frank Charles. She also created stage sets for the musical Annie at the London Victoria Park Theatre, painted portraits of actors, and designed calendars and posters. Some of her portraits created for the American television series Masterpiece Theater were reproduced on the cover pages of television magazines.

Because of her conservative background, Paula Russell had problems with her sexuality. In her twenties and thirties she tried to suppress her sexual needs, but without any lasting success, and even tried starving herself to suppress the growth of her breasts. When she realized that this didn’t work she decided to actively fight her sexual inhibitions and do so openly, not secretly, because she felt this was hypocritical. Around 1980 she began posing for nude photos in magazines. In 1981, when the British porn filmmaker and director Mike Freeman, who had been active since the 1960s, began to produce and distribute pornographic video cassettes with his company Videx in the United Kingdom, Russell contacted Freeman to suggest she appear in one of his films. ‘I decided that I wanted to appear in a sex video,’ she wrote. ‘I took the plunge, enjoyed it immensely, and to my utter astonishment Paula Meadows was born. This new incarnation of me didn’t seem to resemble the earlier, rather timid version at all. Adventurous and insatiable, she launched herself into a new career; exhibiting herself without any shame in glossy magazines, making more films and creating new paintings out of the torrent of erotic imagery that was unleashed. I had already discovered my interest in the riding crop, the strap and the martinet, but now I found that I was not alone in my interest.’

The first Videx title, in which she played under the pseudonym Paula Meadows, was Truth or Dare. The screenplay was written by Irish writer Frank Russell, directed by Mike Freeman, and the male co-star was Lynsey Rod Honey, who later became known as Ben Dover; Frank Russell was unhappy with the implementation of his screenplay by Freeman. In the same year Happy Birthday, on the theme of spanking, again saw Paula Meadows in the lead role of another Videx title. In her private life she now became involved in the spanking scene. In 1983 she appeared in the Amsterdam-based, loosely autobiographical film To Ride a Tiger, in which she was extensively whipped by the well-known dominatrix Monique Von Cleef.

In 1982 Paula started working for the British magazine Janus, first as a model, then as an illustrator. Up until 1986 she created numerous fetish illustrations for Janus and continued to appear as a model; she recounted her memories of her time as a model and illustrator at Janus in The Janus Collection: A Personal Anthology. 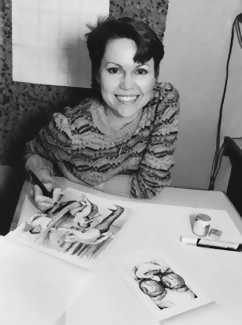 In addition to comics and fetish drawings she has also created coloured drawings for two sex education books by David Delvin.

Paula’s website is at www.lynnpaularussell.org, where you can see more of her work and buy ebooks and prints. 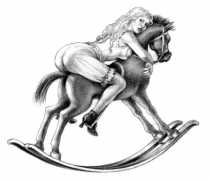 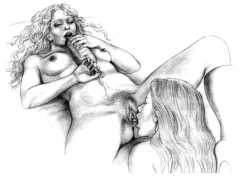 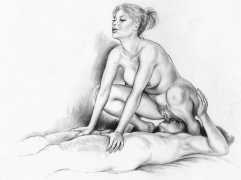 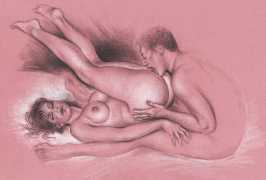 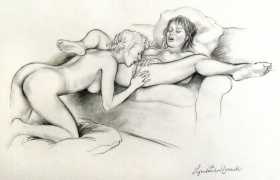 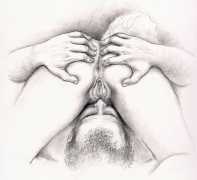 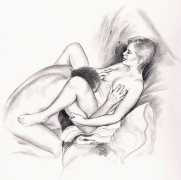 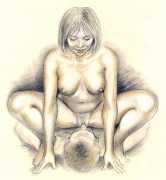 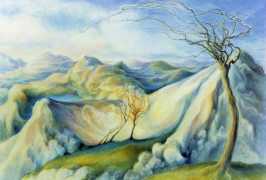 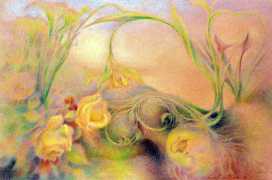 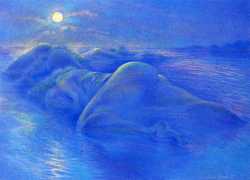